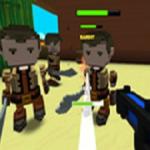 Another spin-off from the cool Minecraft game is here for you to enjoy! The Wild West is a great option as a background and battlefield for a nice shooting game. With the inspiration from the pixelated graphics of Minecraft, the players will enjoy the double pleasure of taking part in a fun shooting game and the amazing design in the map.

The task is to destroy as many opponents as possible inside buildings and in alleyways because it's the only way to keep yourself alive in this intense shooting game at http://gogy.games/. The other opponents will continuously move to search for the enemies as well. If you don't take the initiative, you might become the easy target and get shot. As you move around the infrastructure, utilize your understanding of the background and the setting to choose the perfect stop-by.

Inside the buildings, there will be a lot of possible items and bonuses that can be helpful, while you can hide efficiently in the alleyways. Should you find another opponent, be quick to take her or him down. Don't let anyone else approach too close to your position! Also, this Gogy shooting game has a large collection of weapons scattered around the places.

Pick up anything and test out the power of it. Other than the cool gameplay, real-time players and the feature that records your old progress are two prominent features of this new game. Are you ready to shoot 'em up? Try out other shooting games like Zombie Plague and Army Commando later!

Mouse cursor to aim and fire.