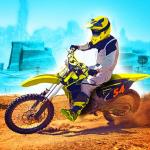 Dirt Bike Max Duel is the latest challenge for the fans of bike racing, where top-notch gamers fight for the best biker title. You will conquer this game on your chosen trusty bikes as they are unlocked from the store using your gained coins. If you are ready to tackle this tough game alongside the others here at the Gogy bike game, hop into the game and ride the bike while rolling on the dirt now!

The dirty path will be changed depending on each game's background, ranging from the mountainous area, roads with obstacles, stone paths, woods, and a variety of routes that you have never seen before. A long adventure awaits for you to embark on a new duel and compete against not only your friends but also your online competitors. As long as you manage to get to the finish line in time and don't let any opponent crush you on the way, you will be able to stay alive for a long time in this game.

The game comes with two significant modes of double player and time. You can pick the one that requires two players to go against the time-restricted races or go against the round winning amount with the remaining option. Feel free to switch to different bikes with your gained coins. Let's see how many bike models you will own at the end of the game!

Here at https://gogy.games/, be prepared for a variety of chapters with lots of fun physics, cool tricks, amazing stunts that are performed randomly, and cool dirt bike tricks that you can learn and utilize later on your turn! Other frequently played games for kids who love racing are Burnout Drift or Car Eats Car: Arctic Adventure, so feel free to take a look when you have the time!

Click the WASD to drive and the spacebar to hit the brakes.