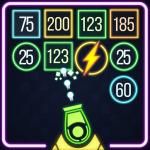 Fun filled Addictive Bricks breaker Game, "Brick Breaker Endless" is out with excitement and fun. This Challenging Breaking neon bricks with firing balls will blow out your stress. Break as many bricks as possible and achieve high score. Shoot the Bricks in proper angle to break more bricks and target power-ups to gain better scores.

Brick Breaker Endless will be a fun-filled gogy games for school   that will bring out the best time for you if you enjoy a good game of ball bouncing that has lots of free movement! Many players have been addicted to this game thanks to the repetitive and easy-to-control gameplay of breaking the bricks.

As long as you continue to shoot the balls out of the cannon using your aiming and managing skills, the bricks will continue to be broken. The more balls you shoot, the more bricks you can break into pieces. Make sure that you get the top score using the limited balls and moves under the pressure of time. Pay extra attention to some boosters and special items that can help clear out more than just one or two bricks at the same time.

An advanced player will know how to set the proper angle per shot so that he or she can break more bricks with one ball and gather plenty of power-ups as hidden in this game at http://gogy.games/. Endless gameplay is available for the fans of the enduring game as you can play for as long as you like, without having to worry about saving progress or clearing a specific level. There will be more to explore such as neon-themed background, as well as a wide range of power-ups.

Let's learn how to hold the canon and aim toward the right direction with the proper angles before starting the real game! Make sure that the block of the grid doesn't reach the bottom of the game screen, or else the level is over! Will you be able to collect some useful boosters like Mega Shot, Tile Freeze, SuperSpeed? Play other similar arcade shooting games such as Fruit VS Knife  and Rectangular Path while you have a time slot later!