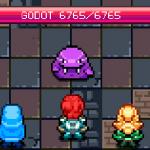 It's up to you to control the heroes in Afk Heroes and embrace them on the bravest journey to defeat the evil in Gogy land! This game is all about defeating monsters, clearing out the bossed, and enjoy a fascinating RPG gaming world. Not only will the number of monsters increase but they will also get stronger and more deadly after every stage. The goal is to clear out the missions that are required to pass on each stage. For the newcomers, there will be a step-by-step tutorial to help you get used to the gameplay.

On this pixelated platform, all instructions, characters, and layout will be in 2D pixelated animation. This type of graphics is not only new and cool but is also similar to the classics. There is only one active hero when you first start the game, however, the number will increase as you gain higher scores and items on the way. You can choose to add up to three party members to the list of your team. Different teams like Archer or Mage will have different functions and can be used at unique timing.

For example, if you are looking for a weapon or ability to help open up the chests filled with gold, you can take advantage of your weapon. Upon finding extra rewards, open them, and collect as many as possible. If you leave them behind, there will be other players coming up to get it. Unify and control the whole team's power to defeat the bosses in the shortest time possible!

Only the top-ranked players who have mastered the ins-and-outs of this game can have their names recorded on the Leaderboard at http://gogy.games/. Will you be able to place your name alongside them as well? Come and enjoy tons of adventure games with RPG themes like Pirate Adventure

Use the mouse to move and control characters.