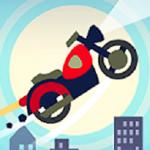 Are you confident in your performing skills on a bike? Let's join this Gogy arcade game with the special feature of a platformer. This is where you control a motorbike and move to advance further in a dangerous world. Not only do you need to reach the furthest checkpoint while maintaining the balance of the bike but you also have to evade the bullets. All of the players will be placed in a setting where rains of bullets are pouring down on them.

Dodging the bullets from the helicopter and controlling the balance of the motorbike at the same time will not be easy, but be brave and tackle this challenge! Even the tiniest mistake can make you crash, make an improper landing or fall right into the water, therefore, there is no room for the slightest mistakes. You will have to move at high speed to escape the enemies.

Bullets and missiles are your biggest threats besides the daunting jumps, flips, and drifts. While being on air at http://gogy.games/, don't forget an important task of collecting stars to unlock new bikes later. Your enemies will be ruthless and shooting at you constantly to create the biggest barrier.

Will you be able to stand out among the other players and reach the top of the Leaderboard? Take up new challenges in new worlds in other bike games like Water Slice 3D and Sports Car Dock Parking as well!

Tap on the screen or click to accelerate, hold in the air to make flips and tricks.