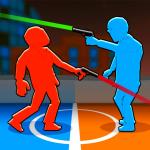 Instead of dragging the other ragdoll like the movement you did in the previous version, this new game of Ragdoll Duel 2P will be all about shooting the opposite ragdoll! Let's tap on this Gogy 2022 funny duel game with the two-game modes of one and two players. Choose the setting that you want to go with and start the game accordingly with the solid aim of shooting the opponent.

The difficulty point of the game is that you can only control the timing of releasing the bullets and not the direction. The ragdoll will automatically swing its hand up and down. All you need to do is to pick the best timing to release the bullet and shoot wisely in this ragdoll game! The work of timing your shots will be more important than the skills to aim as it's all about choosing the best moment.

If you are a newbie, you should focus on the statistics such as the health bar and weapon type. Unlock more weapons using the earned coins to maximize your damage range in the next stages. For advanced users, if possible, try to take advantage of the recoil power to increase the shooting force and the speed as well. Overall, good control of the gun and bullets shall help you ace this fun gaming selection from the list at https://gogy.games/!

Don't forget that you can freely invite another friend to explore more games like Buggy Wuggy and see who can shoot the other first. Pay attention to the three lines in health bars as they signify how much energy your character has left. Let's see if your flexibility and reflex are enough to win this game now!

Player 1 uses the W key or mouse to shoot.

Player 2 uses the up arrow key.