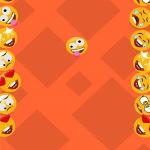 Ping pong is one of the most famous games for two players and it's perfect for the fun party. How about trying out the virtual version of this game in Emoji Pong from Gogy land? Most of the rules and gameplay follow the same motif that you have been familiar with. The main task of this casual game is to hit the pong in order to precisely hit the emojis scattered around the map. Bear in mind that you are not allowed to hit the ground to get points.

If the ball touches the ground, the turn is over and the player will fail. As you just began playing, the game progresses slowly so that the players can adapt to the basic rules. However, the speed of the game will gradually increase to pose tougher challenges to the players at http://gogy.games/. Your reflexes and ability to hit the ball correctly will be tested, as well as the strategy to choose an advantageous path.

The best way to hit the emoji pong is to hit it in the direction which allows the pong ball to bounce against the walls. Keep track of the opponent's progress and change the method of hitting the pong ball depending on each situation. The game also has bright, vibrant graphics and elaborated levels, each with its own missions.

It's one of the easy choices that players of all ages can pick for the relaxing and entertaining playtime. How many emojis will you be able to break down? Take up new challenging games like Roller Splat and Fit in the Wall later!

Click the left mouse button or touch on the screen to move the pong.