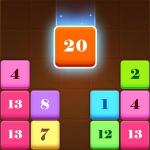 In Drag N Merge, the new puzzle game from Gogy land, we give the players a chance to take up this intellectual challenge where they can show off their skills with numbers. Not only is this one of the brain-teasing games recently added to the collection but it also has the fun gameplay.

This game consists of interacting with numbers and your goal is to merge two identical numbers. When you do, these two will form one new larger number which is equal to the combination of the previous two. However, because the number blocks are scattered all around the grid in a messy order, it's not easy to put two blocks of the same number next to each other.

Make the best use of your moves in order to gain the highest scores possible at http://gogy.games/! Of course, such a calculating game will have a time limit. When the time bar runs out, a new layer will rise which makes the game much more challenging. The tip to sweep out the grid is to think quickly, observe and choose the moves wisely to create the best formation of blocks that allows you to move the pieces easily.

Also, keep in mind that in case there is no number left to merge, this will be a signal of your failure. It's best to compete with your friends to enjoy the thrills of the game and see who can gain the most scores. If you want to explore more games from the same category, don't miss out on other choices like Duke Dogstorm Escape and Match 4

Play with the mouse.