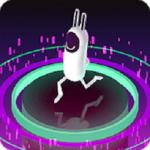 Time is your only enemy in Time Jump free game, a new choice for the players with the best reflexes and estimation ability here in Gogy land! The game is a combination of an arcade and a jumping game for both boys and girls. The main task is pretty easy and consistent throughout the stage so that even the little kids can grasp the gameplay quickly. Your character is racing against the clock and its hands.

As time goes by, the hands of the clock will move in a circular motion around the clock. The main character, who is standing in the middle, needs your help to maneuver his movement so as to jump up and down at the right moment. Choose the perfect timing to jump over each hand and collect the various jumpers scattered around the clock as well. For each stage, you will be required to jump over a certain number of hands for a few times.

For example, only by passing 5 hands successfully on the first stage will you be able to proceed to the second one. The higher the level, the faster the hands move. Keep in mind that you can tap and hold to slow down the time, which makes it easier to think about the next move. Jump over as many clock hands as possible and become one of the best players with an incredibly high score.

From http://gogy.games/, the game comes with simple and monotone gameplay, as well as basic graphics, to make it easier for the kids to focus on the task of jumping. Simple as it sounds, the game also requires a certain ability to focus and estimate a perfect timing. The tip for the new players is to jump a little bit beforehand to prevent being hit by the hands. Keep up the good work with other games such as Zoo Run and Tower Vs Tower!

Jump and collect the items with the mouse.