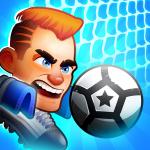 Football Brawl is your chance to live your dream story as the main football player of the strongest team here at the Gogy 2022 online game! You will play the role of the player who is in charge of scoring all the penalties and goals of the game. In order to live up to the name, it's crucial to penetrate the defensive line of other teams and enter the field to gain the most possibilities of scoring. Your job is to play the game with your football skill set.

Once the match starts, enter the field from your position and make sure to tackle the opponent so that you can decimate them with your powerful kicks. Don't forget that plenty of randomly dropped powerups - which might appear to be a bit quirky - will be helpful for your crown. As the final goal for this game is to become one of the best masters with just simple moves, let's start learning the movement of various kicks, jumps, slides, and so on.

You can score only if you can bring the ball toward the net within the given time. Once you are close, start preparing for the penalty shot. On your way to capturing the ball from the opponent, don't forget to move sideways and utilize the jumping feature.The more goals you can score within your time, the higher your ranking will be.

Climb upon newer divisions and unlocks the list of rewards that only the final champion can have! Maneuver the balls wisely or else you will lose the winning shot against other players. Are you ready for such random matches and a variety of players' emotes? Other similar sports games like World Cup Fever might be your next choice for free at https://gogy.games/!

Move using the AD keys, and jump using the spacebar.

Kick the ball using the H or J keys.

Activate the special skills with the K or L keys.