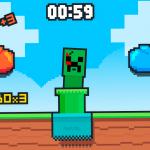 Another spin-off from the classic Minecraft game is here at Gogy 2021 unblocked games for your ultimate thrilling and fun game time with fast movement and constant hits! Keep on hitting the target in the middle of the screen in order to pursue the goal of becoming the first to hit the higher scores. There are two types of game modes that you can choose to enjoy in this game, ranging from 1 player to 2 players.

If you decide to go alone, your job will be to make sure that you defeat the other player - the CPU, while hitting the blocky characters. Smack the hell out of the bad guys that will pop up and down randomly. Instead of building and assembling like other craft games, this one focuses on boxing techniques and hitting movements. Coordinate your hand and eyes well to make sure that you pick the best timing for hitting it.

In case you are looking for a good game option to share with another, select the 2P game mode and get your friend on this! Throw the punches and compete to see which one among you two will be the first to win this game from Gogy games or set the new record! Keep in mind that it takes more than just one or two punches to completely defeat the bad guy.

Also, only go for Steve with an outfit that is not blue. If you accidentally hit the one with a blue shirt, your total score will be deducted by 20 points, therefore, observe carefully and take the movement at the perfect timing. Reflex will be the top element attributing to your success in this free game, as well as in other similar arcade games such as Run! and Escape.

How to play: Use the mouse or tap on the table to punch.